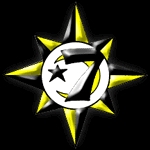 Universal Flag Of The Five Percent

ALL PRAISES DUE TO ALLAH LORD OF ALL THE WORLDS

The 5 pointed star symbolizes Knowledge, the seed the child with the power the Supreme Knowledge that was manifested by W. F. Muhammad as revealed to us by the almighty God ALLAH, it is solid Black!

The Crescent Moon symbolizes Wisdom the women (without child). It shows reflected light (Truth or Knowledge) and is not yet at its fullest Equality. It also symbolizes the Divine Wisdom that was manifested by the honorable Elijah Muhammad and revealed to us by Almighty God ALLAH, it is solid yellow! Together the Star and Crescent stands for Knowledge and Wisdom which is the unity of knowing it and speaking it (teaching). It also symbolized the Earth (Woman with Child) a Planet that has Life, and the dominance the woman has over the Seed (the child or the Knowledge) while it is young, and has been the symbol of Freedom, Justice and Equality since the awakening of Islam.

In the West or North America, The 7 has seven sides; it symbolizes the Original Man, the True and Living God, the Supreme Being, Almighty God ALLAH. Since the very creation of mathematics 7 has been the mathematical terminology for the Creator of the Universe. It is solid Black. Together this stands for the Supreme Understanding that was revealed to us by Almighty God ALLAH himself; it shows a unification of Knowledge, Wisdom and Understanding, Man, Woman and Child. It shows the authority of ALLAH over the planets and Stars and the proper order of the Universe.

The 7 symbolizes the male seed in full bloom, it shows that God must be the most high. The Master of Wisdom, Culture and Equality at all times, because they are 6 and can never dominate ALLAH, so they must remain in 6 or distill back to whence they came! Thus NO PART of crescent moon should ever show over the top of the 7! The white background symbolizes the white clouds of deception that have drowned our people in a sea of ignorance, and the feeble attempts of the wicked to conceal the true and living God which is the Son of Man!

The Cipher around the Crescent Star is Black, the Original color of the Sun (anything that burns that hot and that long cannot be yellow). This symbolizes the Sun, the Universal symbol of Truth and Light; and whose power can evaporate all clouds of deception (lies).

The 8 Points are the symbol of the ever expanding Universe, and symbolizes the rays of the Sun, and the speed and distance that the Truth is capable of traveling. There are two sides to each point, the left is Black. This represents the original Black Man, the right is Gold. The Gold represents Brown and Yellow seeds. The 8 points are a sign of he who is the Master Builder of Rain, Hail, Snow, and Earthquakes!

A WORD TO THE WISE! BEWARE OF FALSE KNOWLEDGE; IT IS MORE DANGEROUS THAN IGNORANCE!